The Numbers Inside the Missionary Advantage

Despite the fact that it seems to come up about every other week in the national media, the notion that BYU has players on its football team that are somewhat older than typical college athletes is not a new story. Many of their players do leave school and football behind (among other things) to spend two years at their own expense in an assigned region of the world providing service and sharing a message of faith and hope.

Both Pros and Cons
Some see this as an advantage—players return older, more physically mature, more mentally mature, and with increased discipline and focus. Others see it as a disadvantage—players return out of shape and rusty having not played football or worked out regularly for two years, players may lose their aggressive edge, and managing personnel and recruiting when losing 40+ players after every season can be a scholarship allocation and depth chart nightmare. It is often also pointed out that if it were such an advantage, then other schools would encourage their LDS athletes to serve missions (the opposite is usually true, as they are generally discouraged from serving). There is merit to the arguments on both sides, and the debate over whether having former missionaries on the team is an advantage or disadvantage will inevitably continue.

Apples and Oranges
What is nearly always missing in the debate, however, is the magnitude of the age difference, or advantage, in question. It is not uncommon for even respected national sports writers to compare an occasional 25 or 26 year old player on BYU’s roster to an 18 year old true freshman on the opposing team. Obviously that is a mismatch. But the underlying question is whether that is an advantage due to the missionary program or not. Given that a mission is a maximum of two years, such comparisons are clearly inaccurate, as other factors (such as late enrollment, redshirt, or injury exceptions) available to any athlete must have led that player to be older. The maximum age advantage then could only be two years—which would be the case if every BYU football player were a returned missionary, and no players on the other team were. But this is not the case—not all BYU players are, and there are some on other teams that have served missions as well. So, with the BYU missionary data courtesy of Carey Hoki, in the BYU Football Media Relations Office, we will take a look at the actual age difference of BYU players versus each of the teams BYU plays this season.

Assumptions
A few assumptions used and how they impact the analysis:
The Relevant Difference
Based on the typical class mix, and given the assumptions above, the average age of a college football player is 19.71 years. Without considering missions, and given BYU’s current class mix, the average age of BYU’s players would also be 19.71 years. Of the 106 players on BYU’s roster in fall camp, 59 of them spent time as a missionary (55.7%). When considering the additional two years in age for those players, BYU’s average age is 20.82 years. The difference then, and only relevant number to the missionary debate is 1.11 years. Whenever comparisons are made or debates are had, as a team, BYU is only an average of 1.11 years older than a player of similar class on the other team.


Here is how the age of BYU players stacks up against each of the opponents this season. The only difference here, being the class mix—some teams are heavy on upperclassmen and others have a disproportionate number of freshmen. BYU’s players range from being 0.97 years older than UNLV (52% juniors and seniors) to being 1.27 years older than Colorado State (45% freshmen). 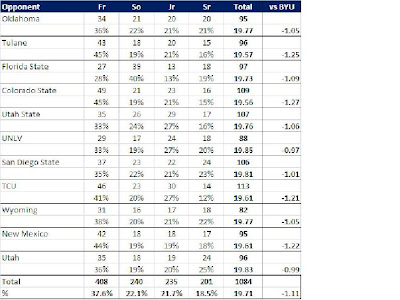