A Few Nuggets from the Preseason Rankings

Preseason rankings have been trickling in for months now, and although the only preseason polls that actually mean anything (justification for that is another debate)— AP and Coaches–still won’t be out for a couple of weeks, by the time they are, we will have plenty of other things to discuss (like fall camp that starts next week). And, it’s unlikely that either of those polls will really add anything to the equation that will meaningfully change what we already know anyway.

So let’s do it anyway… A preseason, pre-AP and pre-coaches poll, panorama of predictions: 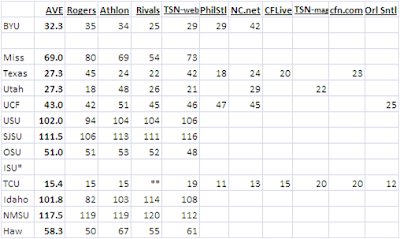 * FCS team
**The top 25 countdown had only reached #20 at the time of this writing
Note: Not shown are Lindy’s, About.com, Blue Ribbon Yearbook, and Bleacher Report, since TCU was the only team ranked in each


While none of this really means all that much other than it’s more fun to look at than we want to admit, here are some of the not-much-more meaningful takeaways:

• While landing in only one top 25, BYU is right on the cusp of just about all of them, and will probably show up in the ‘others receiving votes’ section when the season starts.

• The one list that they do crack the top 25, is also the most recently released, adding another data point to what seems to me a slow rise in perception for the Cougs by the national media as the season closes in.

• While only one team on the schedule is consensus Top 25 (TCU), there are two more that should be included in that conversation (Texas, Utah), and three more that are widely considered to be in the top half of teams this season (UCF, OSU, Hawaii). Another, on the road in the opener (Ole Miss) is thought by the experts to be good enough to be dangerous.

• BYU plays four teams from the cellar of college football. In many cases, this will be used to discount the difficulty of the schedule, and numerically it will—although it shouldn’t. After about number 75 or 80, it doesn’t really matter how good or bad the opponent is, either way, we should be good enough to beat them and likely would whether it’s an 85th ranked Colorado State or a 105th ranked Utah State.

• Speaking of which… the USU game is going to be a welcome relief after a brutal first four games.

• Given that our highest ranked opponent (TCU) is on the road on a Friday, it’s nice to have ISU the week before.

• The Rogers Poll is the only one that is computer based (supposedly removing some of the group think and the human bias), so it’s interesting to see it give Texas (45) and Ole Miss (80) their lowest ratings (reputation alone would keep someone from ranking them that low), while giving Utah (18), UCF (42), Hawaii (50), Idaho (82), USU (94), and SJSU (106) their highest rankings. It would also suggest that the ranks of BYU, TCU, and OSU are just about right (not as influenced by perception, either way), and that NMSU (119) is just plain bad.


I’m sure that there are other insights that I missed. Please chime in with any other thoughts.
Posted by Dave Haynie at 11:45 PM